The Barataria-Terrebonne Estuary Program (BTNEP), in conjunction with the U.S. Fish and Wildlife Service (USFWS) and the Coastal Bend Bays & Estuaries Program (CBBEP), work to better understand the threatened Red Knots in Louisiana.

May 28, 2019 — THIBODAUX, La. — From April to early May, flocks of rusty red sandpipers begin to congregate on the shorelines of southeast Louisiana. This robin-sized sandpiper, known as the Red Knot, is a globally cosmopolitan species, capable of flying up to 4,000 miles nonstop over several days. In December of 2014, the U.S. Fish and Wildlife Service (USFWS) formally listed the rufa subspecies of Red Knot as threatened under the Endangered Species Act after surveys indicated a serious population decline. The Red Knot may spend the winter in locations as far south as Chile, then migrates in the spring to its breeding grounds in the Arctic up to 7,000 miles away. Southeast Louisiana serves as a stopover site within this long journey twice a year.

Since being listed as a threatened species in 2014, BTNEP, in partnership with the Coastal Bend Bays & Estuaries Program (CBBEP) out of Corpus Christi, took action to better understand the status of the imperiled Red Knot in Louisiana. The CBBEP had been gathering data on the Red Knots in Texas since 2009, so the partnership was a natural fit. The joint effort began in Grand Isle, where over 200 birds have been marked with unique alphanumeric leg flags. In 2017, fifty geolocator tracking devices were deployed to learn about the migratory routes used by the Red Knots. The data from the geolocators highlights the critical importance of the northern Gulf of Mexico, particularly Grand Isle, for this population of Red Knots, and the need for further investigation to discover specific wintering sites. “Prior to this work, the connectivity and status of this subspecies of Red Knots in the western Gulf of Mexico were a total mystery,” said David Newstead, Director of CBBEP’s Coastal Bird Program. “The tagging and tracking work in Texas and Louisiana has really put these birds on the map.”

“The Service greatly appreciates the interest of the BTNEP and CBBEP in the life cycle of the threatened Red Knot and their partnership in gathering vital data on the migratory and wintering population of Red Knots in the Northern Gulf of Mexico, especially in Louisiana. This valuable partnership allows the Service to utilize these data in developing recovery strategies and conducting conservation planning for the threatened Red Knot,” said Brigette Firmin, a Senior Fish and Wildlife Biologist of the Service’s Louisiana Ecological Services Office. “To stand beside our partners helping tag birds, releasing those birds back into the wild, and then learning from those efforts where those birds have been is a priceless piece of my job – both the partnership and our work on the Red Knot is the highlight of my spring every year.”

This year there were a total of 46 captures of Red Knots that included marking 39 new birds, and recapturing five birds that had been previously banded — including one with a geolocator device that was recovered. The tagging and recovery of geolocator work conducted on Grand Isle and Elmer’s Isle since 2014 have shown that probably half or more of the birds seen in Louisiana in the spring spent the winter further south in locations such as Nicaragua, Costa Rica, Panama, Ecuador, Peru, and southern Chile. Identifying areas important to this species helps facilitate implementation of conservation actions and efforts that will benefit Red Knots both in the United States and abroad.

“The overall goal of this project is to identify and record data about the Red Knot’s migration patterns. We hope to use the data collected to determine where these birds are traveling to throughout the year. This will allow us to identify any connectivity between locations, and hopefully draw conclusions about what may be threatening the species at any particular location,” said Delaina LeBlanc, Migratory Birds Coordinator for BTNEP. “Learning about challenges these birds face allows us to take action on our beaches and to partner with others to develop solutions in other locations these birds visit in their life cycle.”

As the project continues, and new data is collected, BTNEP would like to thank their partners who have played a critical role in the success of their efforts thus far, including the Coastal Bend Bays & Estuaries Program (CBBEP), U.S. Fish and Wildlife Service (USFWS), Louisiana Department of Wildlife and Fisheries (LDWF), Louisiana Audubon, Scott Maurer with Louisiana Oysters, the Town of Grand Isle, Grand Isle State Park, Barbara Keeler a retired EPA Region 6 employee, Eric Hernández Molina and David Borré with Pronatura Noreste in Mexico, and to all citizens who have taken the time to report sightings, or send in photographs of the Red Knot in Louisiana. 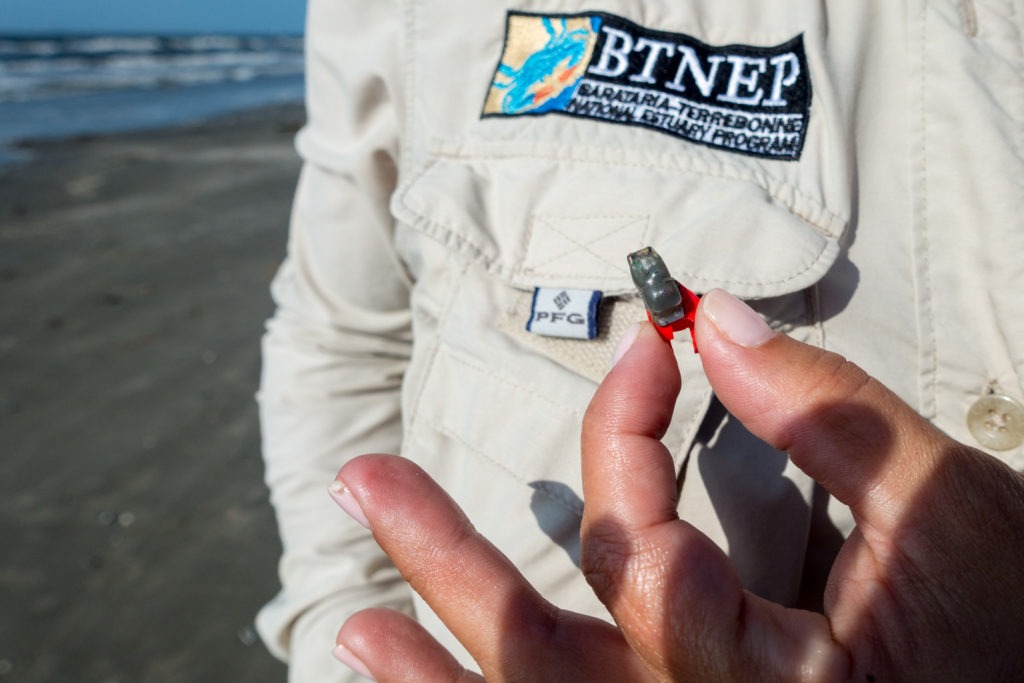 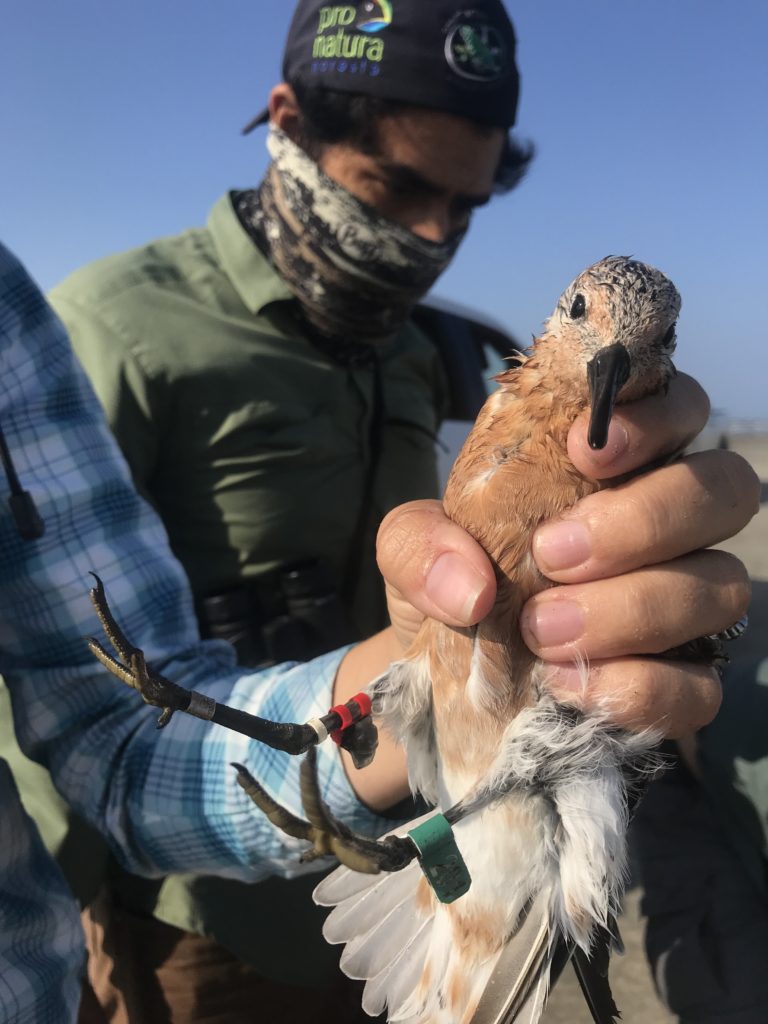 Photo by Delaina LeBlanc – A red knot is pictured with two bands — a red geolocator device, and a unique alphanumeric flag band.