The Barataria-Terrebonne basins continue to have the highest land loss rate in Louisiana.

Subsidence and sea level rise are major factors in the land loss. Episodic events such as hurricanes and severe winter storms have significantly contributed to land loss. The hurricanes of 2005 (Katrina and Rita) caused storm induced stress. Since 1935, the two basins have lost 935
square miles (2,423 km 2 ) of land or 598,730 acres.

Land loss is not evenly distributed across Barataria-Terrebonne. Hot spots of land loss can be seen at the southernmost tip of the basins near the mouth of the Mississippi River in the Barataria basin, moving northward in a narrow band following the river and extending westward to Bayou Perot and Rigolettes. A second hot spot occurs along western Barataria Bay to the Gulf. In Terrebonne, the area of greatest marsh loss occurs in the marshes north of Terrebonne Bay, extending south along the western edge of Terrebonne Bay.

Habitat loss can occur due to many activities. As noted earlier, sediment loss, in conjunction with the natural sinking of marsh, is by far the most significant problem in the estuary. Sea level rise and erosion also contribute to the problem, as can human activities, such as canal dredging and construction of navigation channels. Additionally, overgrazing by mammals, such as nutria and hogs, destroy plant communities that hold soil in place. Studies have indicated that hurricane damage is increased in marshes that have been heavily grazed by nutria or wild hogs.

Storm surges and winds associated with severe tropical storms and winter fronts are additional natural forces that account for significant habitat alteration and land loss in the estuary. During storms or periods of floods, habitats are subjected to changes in water chemistry and extended periods in which they are totally submerged. When a wetland plant experiences sustained and deep flooding, growth suffers. If the flooding stress is sufficient, the plant dies. In the case of saltwater intrusion from the Gulf, some plant species have adapted and exclude salt from their tissues, but their tolerance of salt varies widely. Most fresh marsh species, however, are unable to survive exposure to high salinity waters. Salt tolerant plants can colonize when fresh marsh plants die quickly from salt-water exposure, their roots can no longer hold the soil and massive soil loss can occur before the area. 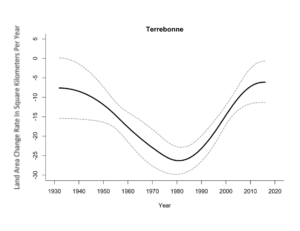 Land Change Dynamics
The Terrebonne Basin is an abandoned delta complex, consisting of marshes and a network of old distributary ridges extending southward from Houma. It is characterized by a thick section of unconsolidated sediments that are undergoing dewatering and
compaction, contributing to high subsidence. The southern end of the basin is defined by a series of narrow, low-lying barrier islands. The Terrebonne Basin supports about 155,000 acres (627.3 km2) of swamp and almost 574,000 acres (2,322.9 km2) of marsh. 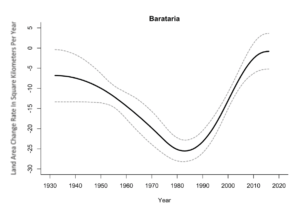 Land Change Dynamics
The Barataria Basin is located south-southwest of New Orleans. It contains vast expanses of forested and herbaceous wetlands spanning from saline to freshwater environments.The Barataria Basin has experienced the second greatest land loss of the nine coastal Louisiana basins, with a net loss of approximately 277,000 acres (1,121.0 km2) of wetlands since 1932. Rates of wetland loss have ranged from a net loss of approximately 6,178 acres/year (25.0 km2/year) at the peak of wetland loss rates, to a loss of 210 acres/year (0.8 km2/ year) most recently (Couvillion et al. 2017). Wetland loss within the Basin is attributed to a combination of natural and anthropogenically-influenced factors including sea level rise (SLR), subsidence, shoreline erosion, herbivory, and human development such as channelization and levee construction.