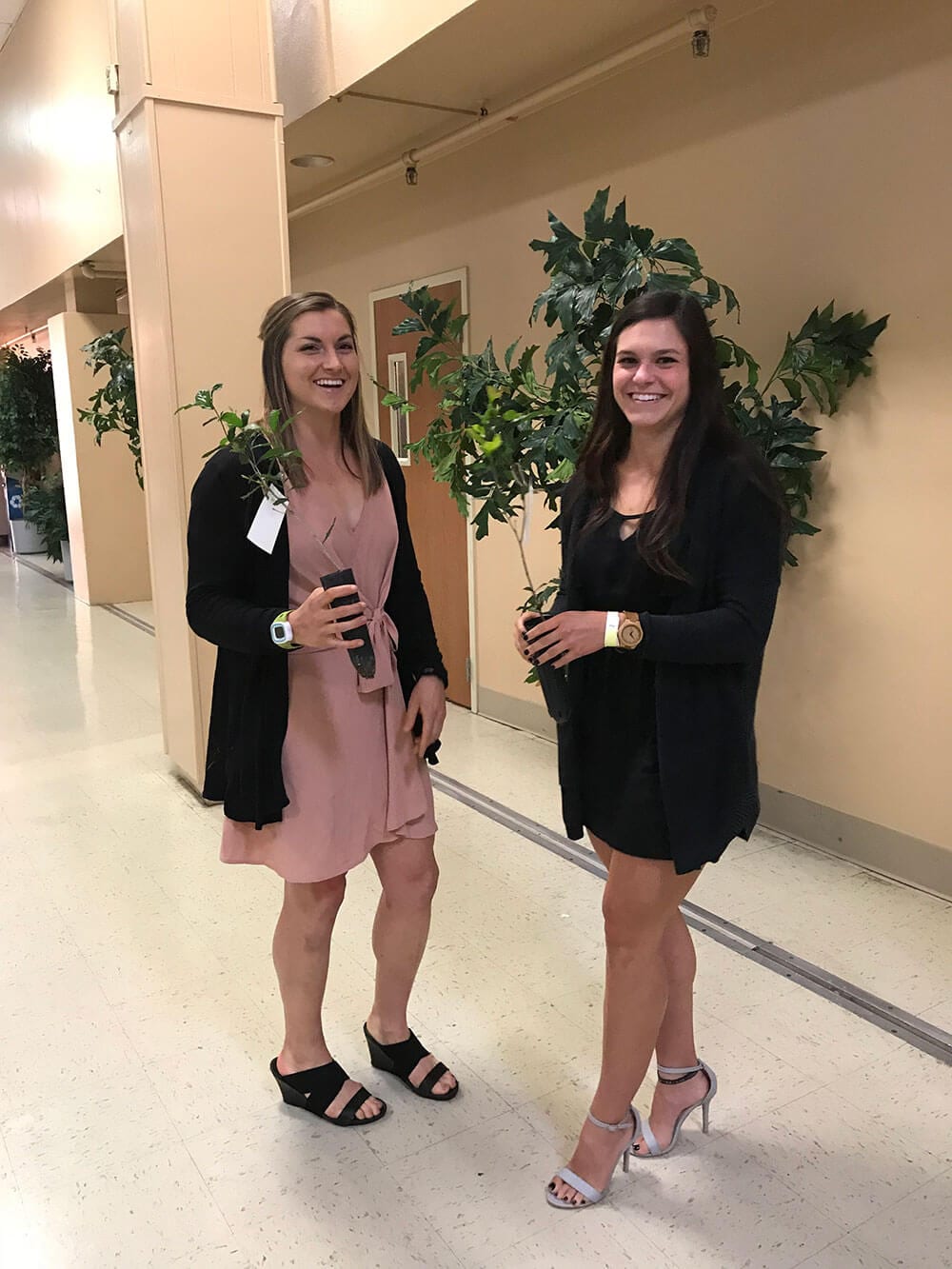 THIBODAUX, LA – Acorns that drop in front of Ellender Memorial Library on the Nicholls State University campus have been collected, grown, and shared with seniors from the 2018 graduating class.

Alma Robichaux, Barataria-Terrebonne National Estuary Program (BTNEP) Education/Outreach Coordinator, thought of the idea from acorns sprouting in her front yard and thought it would make a great gift for anyone. Robichaux connected with Dr. Mary Jackson, Allied Health Instructor and Advisor to the Nicholls GREEN Club, to suggest the gift giving project. The overall idea to grow the oaks and give them to the graduating seniors originated from the Nicholls GREEN Club in hopes that they plant the trees to improve the local ecosystem.

In the fall of 2016, members of the GREEN Club collected acorns from the live oaks l ocated by Ellender Memorial Library. In coordination with America Recycles Day, the club invited other students to aid in the planting of the acorns. The club used this activity as a way to promote environmental awareness and sustainability efforts. The plants were then given to Matt Benoit, BTNEP Plant Materials Coordinator, to pot and grow out the trees at the Nicholls Farm.

Trees were first distributed on April 16, 2018, at the Biological Science Awards Ceremony and on April 19, 2018 at the College of Arts and Sciences Award Ceremony. According to Dr. Gary Lafleur, Biological Sciences Associate Professor, 100 trees will be gi ven by graduation time, which will be on May 19, 2018. Each tree had a label attached to it that read “It’s time to spread your Nicholls roots. Nicholls’ Ellender Library Oak Sapling, Quercus virginiana. Best Wishes from BTNEP and Nicholls GREEN Club.”

“The oak tree is a symbol of stability,” said Robichaux. “I hope the students who receive them remember the great foundation they received from studying at Nicholls.”

According to Dr. Jackson, the project has many merits that would define goals. “It helps the GREEN Club promote environmental awareness to other students,” said Dr. Jackson. “It heightens students’ appreciation for the beauty of nature and the beauty of our Nicholls campus.”

Callie Scull, Microbiology senior said the gift was a sweet idea. “It is not something you will hold on to for a few months and then forget about. It’s something that can actually be planted . I can watch it grow and change over the years.” Scull plans to give her gift to her mother, a former Nicholls student. She said Louisiana oaks mean a great deal to her mother.

Benoit offered tips on how and when to plant and maintain oak trees. He stated they should be placed in an area that receives full sun and in well-drained soil. Optimal planting time is in the fall (late October

and early November) or if planting in spring, plant in April and no later than May. Plant in large open space (at least 60 feet from other trees) with plenty of sun in a shallow, wide, and rough-sided hole (especially wide if planting in hard packed soil). Additional vertical shovel slices in the wall of the hole will help rooting in our hard clay-based soils. Plant in well-drained soil; avoid depressions that may collect water and lead to root rot. The top of the root ball should be slightly higher than the surrounding ground level (about an inch). Fertilizing in the first year is not recommended and only needed when new growth is not noticed each spring. Mulch around base, but do not allow mulch to touch bark as this can cause root collar rot. Pack soil and water immediately. Give seedling a deep watering at least twice a week after planting and throughout the summer.

Dr. Jackson said they plan to continue the project in the future. “We want to give the students a lasting memory of all the benefits received by earning a degree at Nicholls State University,” said Jackson. “An oak grown from campus acorns and given to commemorate commencement is a gift that graduates may treasure for the rest of their lives.”